One of the hardest parts of buying a puppy is picking the perfect one. Some people ask us for the runt, the fighter, the snuggler, the biggest, the crybaby, the most playful, etc, etc. Others have lost a Schnauzer and want this new puppy to take their place. While I can’t guarantee that your new puppy will be exactly like your lost buddy, I can guarantee that you will love your Midnight Schnauzer–no matter his personality. 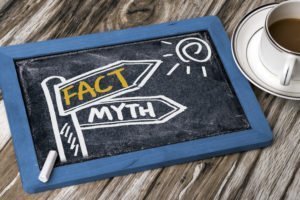 I want a puppy that’s easy to house train.

Said everyone in the history of inside dogs. In that case, I definitely recommend a male. It’s shocking, I know! The male Miniature Schnauzer house training myth has spread far and wide. But we have heard from many people who have house trained both a male and a female, and they have found the male to be easier! Why? A Miniature Schnauzer male’s nature is that they would rather die than displease their owner. Something as little as a change in your tone of voice will make them do a turnaround fast! This makes not only house training easier, but also obedience training. Not that females are impossible to train, but they like to be little Miss Sassy Pants and say, “I already did what you said once, so why should I do it again?”:)

I want a smaller dog that’s easy to pick up.  If your body isn’t working quite like it used to or you just like the idea of a smaller dog, I recommend a female. Our girls (as long as they’re in shape) usually grow up to be 12-16 pounds while the males will be around 16-19 pounds.The picture to the right shows the size difference between male and female littermates. Of course sizing varies and we can always direct you to a larger female or smaller male, depending on your preference. 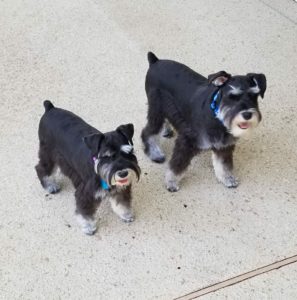 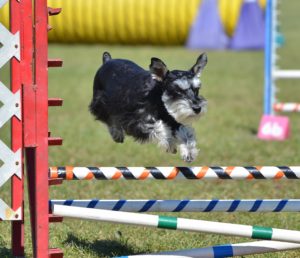 I plan to get involved in obedience training, agility, etc. For advanced training, I would recommend a male. Not that females are impossible to train, but they tend to be more on the stubborn side. If you decide to go with a female, be prepared with extra time and patience. I said earlier that the males would rather die than displease their owner. They live to please their owner too. If you have won their little doggy heart, they will do absolutely anything to make you happy, and that is an invaluable asset in training.

I want a family dog for my kids.  All Schnauzers that are raised with kids (provided the kids haven’t mistreated them) will be great with kids. Almost any well trained Schnauzer will be extremely patient with little people and their antics. But please keep in mind that supervision is required to train your kids and your pet to live together happily and respect each other’s boundaries.

Of course every puppy is different, and you can talk to us here at Midnight Schnauzers to find out more about specific personality traits within the litter. Our goal is to give you the best possible experience bringing a Miniature Schnauzer puppy into your family. 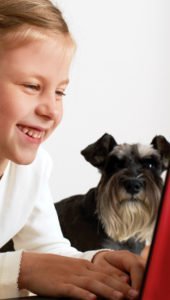